OWN THE FURROW WITH SMARTBOX®

As the Ag industry moves toward faster, more efficient planting, a more sophisticated application system is needed. Own the furrow with SmartBox - a system of variable rate and speed technology with greater accuracy at low application rates. It reduces worker exposure issues, improves farmer productivity and increases application accuracy. The system is incredibly reliable, has only one moving part, requires essentially no field maintenance and is more accurate than conventional pulley’s and chain metering technology. Simply put, SmartBox is the most advanced closed-application system available.
Download SmartBox Information Sheet

SmartBox closed containers eliminate the need to open, empty and dispose of bags and packing material, reducing the potential for inhalation and skin contact.

Based on speed inputs from GPS or radar, SmartBox adjusts the flow rate to deliver a constant and uniform rate of product down the row, even if planting speed fluctuates.

With a product such as Thimet® insecticide, a 6-row planter equipped with the SmartBox system can treat more acres without reloading.

If you need replacement components for your SmartBox system or to schedule a calibration, please call 1-888-SMARTBOX.
SmartBox Resources 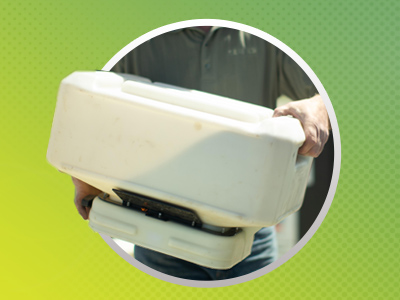 What is the SmartBox System?

The granular insecticides are delivered in 50-lb. transfer containers that can only be opened when attached to the SmartBox System base containers which are mounted on the planter.

What products can I use with the SmartBox System?

Currently, AMVAC offers sugarcane growers Thimet insecticide to control wireworms. AMVAC is always looking to expand the current portfolio of products to be offered through the SmartBox System.

Why should anyone use the SmartBox System?

Do I need to calibrate the SmartBox System?

AMVAC always recommends that you calibrate your SmartBox System. The SmartBox System is easy to calibrate and makes this needed procedure a much simpler process. All the grower needs to do is place the controller in calibration mode, collect a timed sample volume from each row, enter the amount collected from each row and hit enter on the controller.

What PPE should I use with the SmartBox System?

While the SmartBox System provides the best protection available, it is always important to read the label and follow each product’s recommended PPE.

How do I order a SmartBox System?

Growers can order their Smart Box System by either:

The SmartBox System Manager software is a Windows-based PC program that is compatible with Windows XP – Service Pack 3, Windows Vista, Windows 7 and Windows 8.